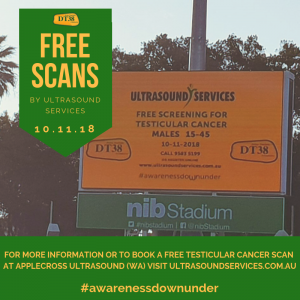 We are very proud to have teamed up with Ultrasound Services once again to offer free testicular cancer scans to males aged between 15-45.

All scans must be pre-booked and will take place at Applecross Ultrasound, Applecross, Western Australia on November 10th.

A Very Happy Hat Trick for DT38 in November

Next month is going to be one of the busiest in our history as we prepare for three fundraising events in the UK.

Firstly we kick off on November 7th with our Football Legends Q&A featuring our Patron Mile Jedinak and a host of other soccer stars, then four days later we head to the renowned London venue York Hall for the DT38 White Collar Boxing Day with Peacock Gym and we wrap up our events on the 21st with our Annual Poker Tournament at Crown Aspinalls London.

All three occasions are set to raise important funds to enable DT38 to continue raising awareness of testicular cancer.

More details about each event are included within this newsletter.

Legends Line-up for DT38 at Special Q & A

A team of former football stars will be taking part in a special dinner and discussion to raise funds for DT38.

Our charity’s patron Mile Jedinak will be joined at The Cow Pub and Dining Rooms, Westfield, Stratford for a panel chat with Hammers heroes, Steve Lomas and Tony Carr MBE, the Academy Director famous for nurturing the likes of Rio Ferdinand, Frank Lampard, John Terry and, of course, Dylan Tombides.

More star names for this event are yet to be announced.

The event – which will be hosted by Talksport’s Ian “Moose” Abrahams – on November 7th, includes a three course meal and the opportunity to ask questions of our celebrity panel.

All proceeds raised will be donated to DT38 Foundation.

Tickets are priced at £65 and the evening begins at 7pm.

Former World Series of Poker champion Martin Jacobson and ex footballer Tony Cascarino were among the guests at the inaugural DT38 Charity Poker Night in 2017 and this year’s event will be even bigger and better.

A host of famous faces and big DT38 supporters will be taking to the tables at Crown London Aspinalls on November 21 to battle it out for the title of DT38 CPN Champion and raise funds for our charity at the same time.

Competitors this year include Martin Jacobson, Carlton Cole, Winston Reid and Jack Collison with more big names from the world of sport to be unveiled.

Thank you to all who’ve agreed to take part, it’s going to be epic!

If you would like further details about attending this high-flying event, including the “buy-in” email tracylee@dt38.co.uk 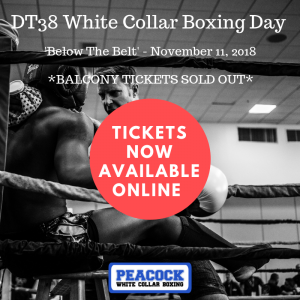 A galaxy of stars will be attending our first ever White Collar Boxing event, named “Awareness Below The Belt”, in support of DT38.

Among the big names attending on the day are football stars Declan Rice, Carlton Cole and Jermain Defoe as well as former Eastenders actress Daniella Westbrook.

The action – which runs from 2pm to 8pm – is being organised by experts from Peacock Gym and with a series of boxing matches featuring complete beginners who have been training hard for the big day.

Each of the big-hearted competitors has committed to take part to raise funds for DT38 Foundation.

Lots up for auction so far include a £4,200 made-measure-suit from Saville Row tailor and Hammers fan David Cooke at Denman and Goddard, a signed Declan Rice match day shirt, a meal for two at May Fair Kitchen, London, a suit from Hawes and Curtis, an overnight stay at St James’s Hotel and Club in Mayfair, a training session with heavyweight boxing sensation Daniel Dubois at The Peacock Gym and a golf package.

There’s a lucky seven birthdays for DT38 Ambassadors across October which kicked off with former Hammers midfielder Jack Collison who turned 30 on the 2nd.

On October 26thgoalkeeper Sam Cowler will be 25 and Rotherham United winger Ryan Williams will be also be 25 on the 28th.

Happy Birthday all, thank you for your support.

We receive so many amazing images from DT38 supporters across the world and we love to share them.

It’s always a very difficult choice, but every month we choose our ‘Picture of the Month’.

This month we’re proud to share this great picture from the amazing Peacock Gym.

Working up a sweat here is Hammers fan Baz Cox (right) who’s going to be taking part in the DT38 White Collar Boxing Day, “Below the Belt” on November 11th! 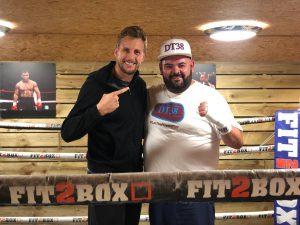 And that brings to end of this October 2018 edition of Channel38, but we’ll be back with an update in November.

If you have helped DT38 in some way in recent times, please be sure to let us know so we can include it in one of our future newsletters. Contact tracylee@dt38.co.ukor connect with us on Twitter Facebook orInstagram