Welcome to the DT38 Foundation May newsletter, Channel38.

This is where we bring together the latest news, events, support stories and developments at DT38.

It’s also an opportunity for us to share important information about the work we do to raise awareness of testicular cancer around schools and in communities as well as publicly offering our thanks to the many people who support us in our work.

We were delighted to announce recently that West Ham United icon Carlton Cole is now an Ambassador of DT38 Foundation.

Our huge thanks to Carlton for coming on board and pledging to help us spread the word about DT38 and the risks of testicular cancer.

We are extremely grateful to everyone at West Ham for giving us this amazing opportunity to raise awareness of DT38 and our work in view of the packed stadium, once again.

As always, the fans greeted us with such warmth.

Pitch-side before the match, our Founder Tracy Tombides, gave an interview which was relayed onto the big screen.

It was a wonderful opportunity to talk about Dylan, his legacy and our continuing work to educate people about the risks of testicular cancer.

We were given a spread in the match day programme and on WHUFC.com and plenty more was organised for us besides.

In a busy month for DT38, our founder Tracy was also present at the West Ham Player Awards on April 25th at the Intercontinental London – The O2 Hotel.

Other Hammers picking up accolades included former DTA winner and DT38 Ambassador Declan Rice and Marko Arnautovic who scooped Hammer of the Year.

For organisational reasons the big day – supported by West Ham United FC and Crown Community London – has been moved to the autumn and will take place at the legendary York Hall, Bethnal Green.

Taking control of the DT38 fundraising auction and presenting the trophies will be former WBC light-heavyweight World Champion John Conteh. The event will be hosted by former BBC broadcaster Johnny Barren.

We’ll be providing updated information about tickets as soon as possible.

DT38 Picture of the Month

We are delighted to receive so many fantastic images of people doing cool things to raise awareness or funds for DT38.

And the job of picking the DT38 Picture of the Month is always a tall order.

But, the winner for April is this snap of DT38 Youth Ambassador Lee Bondi, pictured here with Hammers skipper and fellow DT38 Ambassador Mark Noble.

This is one to remember!

Please continue to send in those pictures of you wearing your DT38 hats, t-shirts and scarves from wherever you are in the world at that time. It is great fun and we LOVE to share them so please keep posting them to our social media channels or tracylee@dt38.co.uk

We are delighted to confirm that we have been awarded several spaces in the Virgin Sport Westminster (London) 10k on July 15th, 2018.

DT38 Ambassador and unbeaten boxer Mark Little has already pledged to run at this event and if you’d like to join him by running for DT38 please get in touch Tracylee@dt38.co.uk 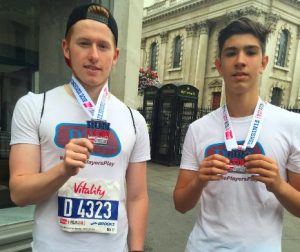 On May 24th Dylan’s former teammate Jordan Spence – now at Ipswich Town FC – will be 28 and Blair Turgott is celebrating his 24th birthday on May 22nd.

On May 31st, former Perth Glory midfielder Mark Lee will be 39-years-old.

And that brings to end of this May 2018 edition of Channel38, but we’ll be back with an update in June.