Welcome to the February edition of Channel38, the newsletter for testicular cancer awareness charity, DT38.

In case you’ve just discovered DT38, this is the place where we bring together news of the latest events, support stories and developments at the charity.

It’s also an opportunity for us to share important information about work we do to raise awareness of testicular cancer around schools and in communities at large.

We are delighted to welcome Ipswich Town FC forward Freddie Sears as an Ambassador of DT38.

As a graduate of the West Ham United FC Academy, Freddie spent time at the club with Dylan before going on to make 46 appearances for first team.

Dylan and Freddie became good friends and enjoyed a nice round of golf whenever they could.

Freddie will support DT38 in its mission to raise awareness about the risks of testicular cancer.

We are delighted to reveal that Mayfair Mayhem, the first ever White Collar Boxing event in aid of DT38 will take place on June 10th, 2018.

The big day – supported by West Ham United FC and Crown Community London – will take place at the legendary York Hall and see David Sullivan Jr enter the ring in one of a series of novice bouts, guaranteed to wow the crowd and raise the excitement levels.

What is White Collar Boxing? White Collar Boxing is a form of boxing in which men and women, mostly with no prior experience of boxing, train to fight at special events. The term white collar refers to office workers although the activity is not officially to people who work in that environment.

The action – which runs from 2pm to 8pm – is being organised and officiated by the famous London boxing centre Peacock Gym and applications are still being taken for males and females who wish to take part and enter the ring.

Taking control of the DT38 fundraising auction and presenting the trophies will be former WBC light-heavyweight World Champion John Conteh. The event will be hosted by former BBC broadcaster Johnny Barran.

Tickets will go on general sale on March 19th, 2018. We will announce details about how to purchase tickets on the DT38 social media networks.

Celebrating turning one year older this month were DT38 Ambassador Jack Clisby, of Western Sydney Warriors, who was 26 on February 16th and DT38 Co-Founder and brother of Dylan, Taylor Tombides, who marked his 22nd birthday on February 21st. We hope you both had the best days. 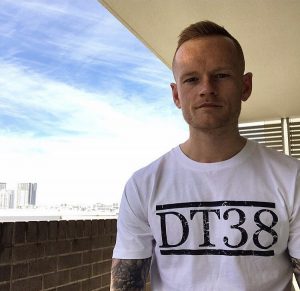 We are so grateful to more than 30,000 people who follow and support us on social media.

Here are just two of the many wonderful messages received this month, one from former Premier League striker Michael Bridges and another from Hammers fan Andy Stoddart

With the amazing support of West Ham United FC, we will be bringing you the fourth annual DT38 Awareness Day this year.

We are thrilled to receive a huge number of pictures every year from supporters wearing your DT38 hats, t-shirts and scarves from wherever you are in the world at that time. It is great fun and we LOVE to share them so please keep posting them to our social media channels or tracylee@dt38.co.uk

Every month we’ll pick the best of the bunch to show off to our thousands of followers on Channel38, so get snapping!

And so to this month’s winner for February. We’re please to reveal it is Robbie Johnston who looked super cool in his DT38 Trucker Hat while on a family trip to Bali. Great work Robbie! 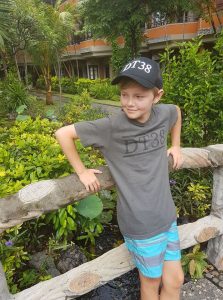 If you would like to run for DT38 and take part in either of these races please get in touch Tracylee@dt38.co.uk

And that brings to a close this February 2018 edition of Channel38, but we’ll be back with an update in March.