We will never forget 2017, it was a fantastic year for DT38 Foundation in so many ways, because of so many people.

Young and old gave their time, energy and donations to DT38 meaning that we could use our time, energy and your donations on making more people aware of the risks of testicular cancer and the stigma that still lurks around men’s health issues in the UK, Australia and across the world.

Frankly, we received so much support that it would be unrealistic for us to attempt to name every person or organisation in this exciting review, but rest assured we are extremely grateful to each and every one of you. Thank you.

We hope you enjoy part 2 at our look back at the year. 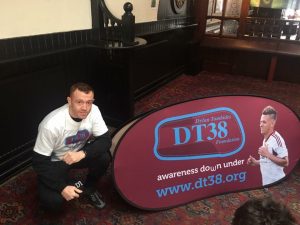 Also that month five three dedicated runners – Emma Green, Tom Campbell, Scott Corless, Hayden Fowle and Cameron Watts – pounded the streets of the capital in the Vitality London 10k to raise funds for our cause, meanwhile, Down Under, Subiaco AFC Under 15s flew the DT38 flag in the opening ceremony of The World Youth Cup and came away with silverware to boot.

What a way to start August when the Hammer’s sponsor Betway decided to donate their shirt space for the big pre-season friendly versus Manchester City in Iceland.

The Irons later went on to auction the DT38 match shirts to raise funds in support of our mission to raise awareness of testicular cancer and stigma surrounding men’s health issues.

And the Betway team continued to support DT38 later in the month when they joined forces with West Ham Fans FC to play a match raising £350.

Of course, we receive so much support from West Ham United FC, the West Ham United Foundation and so many Hammers fans and Baz Cox led the way in August when he began raising cash for DT38 through this charity bets initiative. 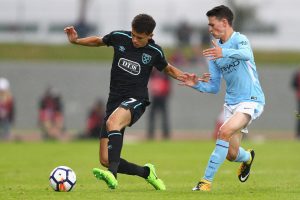 And we received yet more support from claret and blue quarters in September when the big boss at the WHU Foundation, Joe Lyons, cycled a 100 miles to raise more than £1,000 for DT38.

In October, QPR FC physio Dan Bernardin, Hammers First Team Kit Manager James Saban and Dylan’s Australia Under-17s team mate Tom King came on board as Ambassadors of DT38 and we were very pleased to carry out another round of DT38 free screenings in Perth so that more men could be checked for testicular cancer.

Former World Series of Poker Champion Martin Jacobson, Dylan’s brother Taylor Tombides and Talksport’s Tony Cascarino were among the guests at a Charity Poker Tournament at Crown Aspinalls London in November which raised important funds for our charity. 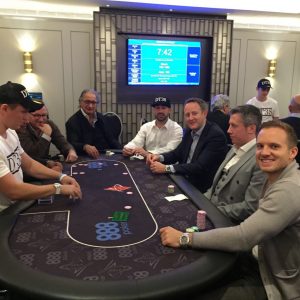 And we closed the year (December) with the support of the “Long Live The Boleyn” exhibition in London, which took a nostalgic glimpse at some of the glorious memories enjoyed at the Hammer’s former home. We are very grateful to have received a donation from the sale of prints at this event.

It is because of those funds and the many initiatives and donations supporting DT38 across the year that we are able to continue to educate young people about the importance of health and well-being, to share vital information about men’s health issues online and to arrange free testicular cancer checks for the public.

It is because of this money that we can share Dylan’s inspirational story and tell as many people as possible about the risks of the disease and the importance of ‘self-checking’.

And it is because of all of these huge efforts from our supporters, partners, volunteers and ambassadors in 2017 – sadly far too many to mention personally in this piece – that we can continue to make a difference to the lives of families across the UK, Australia and further afield.