We will never forget 2017, it was a fantastic year for DT38 Foundation in so many ways, because of so many people.

Young and old gave their time, energy and donations to DT38 meaning that we could use our time, energy and your donations on making more people aware of the risks of testicular cancer and the stigma that still lurks around men’s health issues in the UK, Australia and across the world.

Frankly, we received so much support that it would be unrealistic for us to attempt to name every person or organisation in this exciting review, but rest assured we are extremely grateful to each and every one of you. Thank you.

Here’s a walk through the first half of 2017, a busy and exciting year for all involved.

We got off to a bumper start in January when we proudly revealed that Scott Howes – the father of Watford FC keeper and DT38 Ambassador Sam Howes – would be running 26.2 miles for DT38 in the Virgin London Marathon later in the year.

One of the most promising aspects to develop since DT38 was founded almost three years ago, was the amount of support we receive from young people.

The inaugural meeting of a DT38 Youth Committee took place over pizza at Siena’s in Leederville, Perth and back in the UK it gave us great pleasure to reveal in the same month that junior DT38 supporters Leia, Kobi and Mali (Team LKM) were to run 38 miles in 38 days for the Foundation – they went onto raise a whopping £1,586 to support our work. 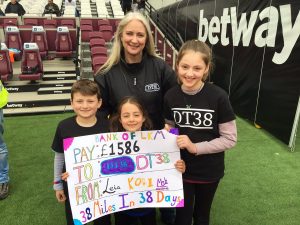 In February we received the news that a very special match was planned at nib Stadium one month later.

Manchester United legends including Bryan Robson, Paul Scholes, Denis Irwin and Dwight Yorke, no less, were to take on a PFA Aussie Legends outfit and DT38 was to be one of two charities to benefit from the event.

As March arrived the match took place and the Aussie XI ran out 3-0 winners with Nick Carle netting the opener in the 38th minute, just as applause rang around the ground in memory of Dylan. 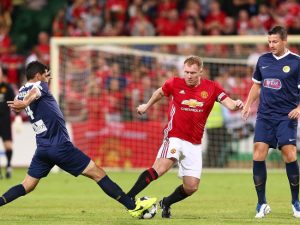 It was to be a very busy and exciting month for DT38.

Earlier that month West Ham United had paid tribute to Dylan before their Premier League 2 fixture with Stoke City at London Stadium to mark what would have been the talented striker’s 23rd birthday.

And on March 18 we were thrilled to take centre-stage at the London Stadium for the third annual DT38 Awareness Day in collaboration with West Ham United FC.

The event begin with a clutch of dedicated DT38 supporters on a sponsored 3.8 mile walk – supported by Lysis Financial – from The Boleyn Tavern to Dylan’s memorial at Champions Place, Queen Elizabeth Olympic Park, before a pitch-side parade and the Hammers Premier League clash with Leicester City. 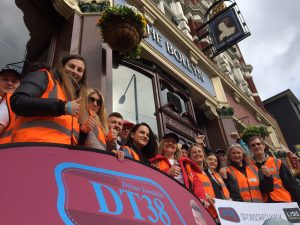 We are so proud of our partnership with the West Ham United Foundation and World Book Day (March 2) was just one of the many days their team visited schools across the East London area last year to educate young people about the importance of resilience when faced with adversity through Dylan’s inspirational story.

April was officially Testicular Cancer Awareness Month and we held the first of many DT38 free screening days for the public in collaboration with Ultrasound Services (Aus) and Spire Roding Hospital (UK) which led to us checking many men for testicular problems across 2017. 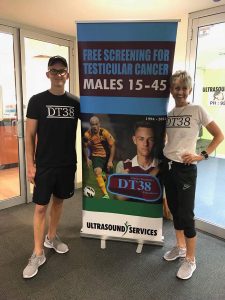 On April 8, nib Stadium fell silent on the 38th minute of the A-League clash Perth Glory v Brisbane Roar, to remember Dylan who passed away on April 18, 2014, aged 20.

Also that month gutsy Scott Howes – our remarkable London Marathon man – crossed the line in a very respectable 4 hours, 16 minutes raising more than £2,000 for DT38 through his mammoth efforts.

Further DT38 free screenings were held in May, meaning more men were checked for cancer and potentially more lives were saved as a result.

Meanwhile, to wrap up a thrilling month promising Portuguese midfielder Domingos Quina scooped the Dylan Tombides Award at the West Ham United Player Awards to cap a fabulous breakthrough season for the youngster.

As half time approached in 2017 we were thrilled to witness The Dylan Tombides Trophy in June – with the support of Football West – as Perth Soccer Club overcame Stirling Lions 2-0 (Dylan played for both as a youth) to clinch the honours on a special day dedicated to supporting DT38 and paying homage to Perth-born Dylan. 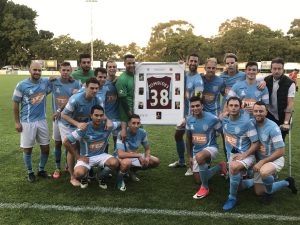